Big props go out to everyone who worked or played at AFROPUNK Fest 2013!  It is a great Fort Greene summer tradition, and we can hardly wait to see the lineup for 2014!  Turf the Slab was particularly excited to see a long procession of food trucks lining Navy Street and bicyclists swarming around Commodore Barry Park. Welcome to the future!

Turf the Slab wants Commodore Barry Park to be a community destination more than once a year.  Why not every weekend, day and night?  Imagine gleaming new turf fields crowded with athletes young and old, with an endless parade of runners circling them on a Mondo track.  The crowds come out to cheer them all on. Bicyclists stop to catch a breath.  And everybody lines up to grab a bite.  A regular crowd is great engine for local entrepreneurs, and food trucks could not ask for better, more reliable customers than hungry sports fans in a veritable food desert. Just ask the pupusa truck at the Red Hook ballfields!

This weekend, AFROPUNK Fest returns to “The Slab” in Commodore Barry Park for two amazing days and nights.  AFROPUNK is Fort Greene at its best, with an irresistible lineup that includes Chuck D, ?uestlove, Jean Grae, Death, and so many others.  Come for the music, but stay for the marketplace of local wares, art, and food. The festival runs Saturday, August 24 and Sunday, August 25.  You can click here to learn more and check schedules.  Turf the Slab is a strong supporter of AFROPUNK and has every intention of making it a permanent part of the Commodore Barry Park summer experience.  See you there!

We often hear concern about the cost of field use permits, so let’s price them out.  In Prospect Park, field use for sports like soccer, football, frisbee, etc. runs $16/hour without lights, and $25/hour with lights.  If you play with 20 players (10 on a side) that works out to 80 cents per person without lights, and $1.25 per person with lights, which sounds like a real bargain. By comparison, a full season tennis permit costs $200.  A single play tennis reservation costs $15, and you can only split that cost among a maximum of four people on a court. 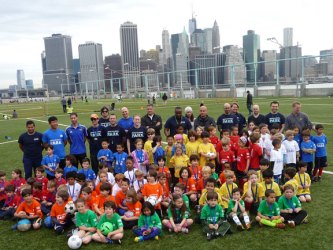 Brooklyn Bridge Park recently began a youth soccer league that costs a mere $25 per player for a 10 game season, and that covers use of a gorgeous new turf field, a coach, one weekly practice, and a team T-shirt!

If cost is an issue for players, many local businesses and organizations in this community-minded neighborhood of ours would be thrilled to sponsor local sports teams, especially in youth programs.  Sponsors will happily cover the cost of permits, and can even supply uniforms and refreshments to boot. If you have a team seeking sponsorship, or if you are a local business seeking sponsorship opportunities, please email turftheslab@gmail.com or feel free to leave your information in the comments. 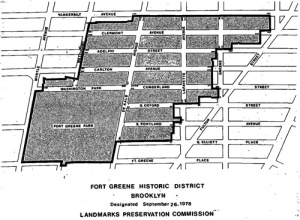 “Turf the Slab” recently made some ink in the latest Brooklyn Paper.  While the article downplays the real promise of Commodore Barry Park, it does highlight the fact that turfing the oval in Fort Greene Park is a nonstarter.  The park is landmarked, and the Landmarks Preservation Commission (LPC) would never approve a turf field.  In fact, the LPC could not even accept an application for such work unless it was fully funded to the tune of roughly $3 million (more with lights). The burden to raise that mountain of money would fall on local elected officials who would never waste political capital on a project bound for certain failure.  Even if pigs flew, approvals alone would take years and would spark nothing but conflict in the community, inflicting far more harm than any soccer players kicking up dust ever did.  People should understand that the turfing process itself is not as simple as rolling a nice green carpet over the dustbowl.  It would require heavy machinery to excavate and level the oval several feet down to pour a cement foundation and build a drainage system.  This would all necessarily take place in warmer months, so the park would be a construction site in peak season.  Then, once you turf and infill, Parks would be obligated to build a tall chain link fence cage around the entire field for safety.  They could also make a case for lights so youth sports can clock more daytime hours, with some adult demand moved after dark.  Let’s face facts, turfing the oval is just a losing proposition all around, and one that even the Dustbowl soccer players themselves reject outright. 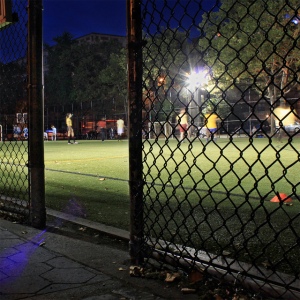 A turf field caged in chain link fencing is not a good look for Fort Greene Park’s oval, but it’s absolutely perfect for “The Slab” at Commodore Barry Park.

Turf the Slab’s plan has no such hang ups, and is practically “shovel ready”.   Commodore Barry Park may be Brooklyn’s historic first park, but it is not landmarked.  Parks would love to make Commodore Barry a dazzling flagship, and with the Navy Yard and Admiral’s Row developing rapidly, local leaders know that improvements to Commodore Barry are wise and sustainable investments in our community.  And most importantly, any local citizen who visits Commodore Barry Park can so clearly see its incredible potential to host sports and events, and to bridge divided areas of Fort Greene at long last.  With gleaming new turf fields and a Mondo track for runners, Commodore Barry could be a vibrant green oasis at the crossroads of Brooklyn’s most exciting neighborhoods.  The people of Fort Greene deserve a real home field and Turf the Slab wants to help deliver it.  Follow us and stay tuned for the latest news and special announcements from now through local elections this fall.

Olanike Alabi, a candidate looking to fill Tish James’ council seat here in District 35, has responded with a commitment to build at least one home field for local sports in Fort Greene and supports the choice of Commodore Barry Park.  Her answers are as follows (in bold/italics):

We thank Ms. Alabi for her participation in our informal “Turf the Slab” candidates forum and we look forward to hearing from the other candidates soon!

Mayor Bloomberg isn’t the only term-limited politician leaving behind a hotly contested empty seat.  Brooklyn is losing Borough President Marty Markowitz, and we in Fort Greene are losing Councilwoman Letitia James (now running for Public Advocate).  As a whole new crop of candidates competes to fill the void, local voters want to know if any of them can finally deliver a real home field for local sports in our community.  All candidates are hereby officially invited to answer the following three questions, and based on their responses, Turf the Slab will award “Parks and Rec Champion” endorsements.

While other Brooklyn neighborhoods are building new fields and growing sports programs, our local youth still have no home field and our community suffers the continuing division of the soccer dustbowl in Fort Greene Park.

We will post the candidates responses as they are received.  Follow us and stay tuned! If you have other questions about local sports and parks improvements that you would like the candidates to answer, please feel to share them in the comments.