Turf the Slab is here to help build Fort Greene a permanent home field for local sports at long last.

There are so many amazing public sports fields in Brooklyn, from Prospect Park to Red Hook, and now Brooklyn Bridge Park and Bushwick Inlet Park.  We think it’s Fort Greene’s turn. 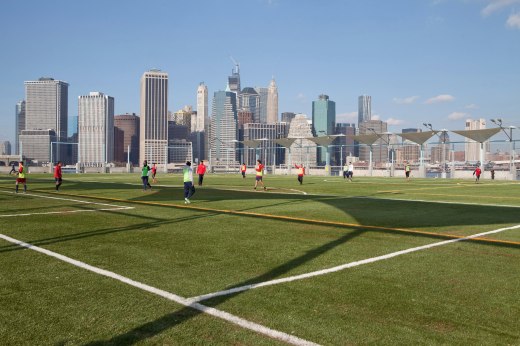 Imagine an official pitch in our own backyard; a community magnet for athletes and fans of all ages, and maybe even food trucks!

FORT GREENE TRIVIA:  Did you know that Commodore Barry is the oldest park in Brooklyn?  Originally called “City Park”, it was purchased by the Village of Brooklyn in 1836 and was renamed after Commodore Barry in 1951, owing to its proximity to the Brooklyn Navy Yard that Barry helped found.  Fort Greene Park, originally called “Washington Park, was a close second dating to 1847.  It was named Fort Greene in 1897 when its Olmsted and Vaux makeover was finally completed.

While growing fields and a sports community in Commodore Barry Park is our only priority, we also support efforts to revitalize Fort Greene Park.  We are blessed to have two such amazing, historic parks in one little neighborhood, and they both deserve the greenest futures we can make for them.  Now that the “Dustbowl” soccer game is over, it is important that Parks be allowed to reseed Fort Greene Park’s oval properly and tackle lingering drainage issues.

The photos below offer us all a sense of what Parks accomplish with our support. Here is the oval in 2013, after reseeding efforts were trampled by the nascent Dustbowl soccer game in 2005-2006… 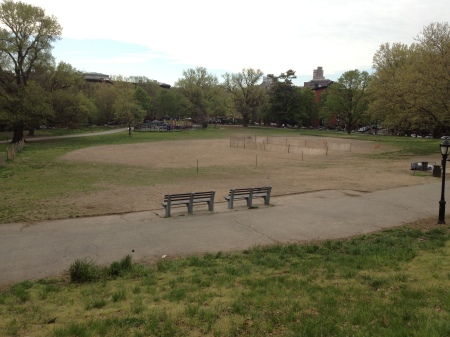 The Parks Department and dedicated local leaders and neighbors have brought Fort Greene Park back from the dead, and restored it to greatness.  Thanks to their tireless efforts, the Prison Ship Martyr’s Monument has been lovingly restored, only to loom over a desolate oval.  It is safe to say that Olmsted and Vaux never envisioned a dustbowl as the centerpiece of our fair park.  To experience their vision, head to Sheep’s Meadow in Central Park…

Ours is not the only Olmsted and Vaux oval to see hard times.  Central Park’s “Great Lawn” also had a “Great Dustbowl” phase, thanks to unregulated use in the 1960’s and 70s’… 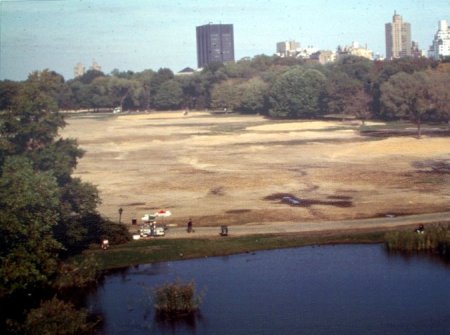 However, in 1995, it was closed for a two-year restoration… 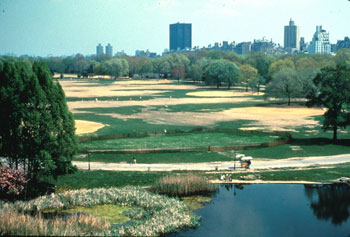 And today a well-regulated Great Lawn is once again a lush green retreat for the public, that also hosts concerts and permitted baseball leagues.

It’s time our little oval got a similar chance to come back healthy and green once and for all.  We hope to provide you a full Parks department assessment on what that process may require, from re-seeding to proper drainage.  When the time comes, we look forward to raising community awareness and support.

This is a community movement, so let’s hear from you!  This site is a forum to share ideas, information, and resources, so please feel free to comment here.  We intend to keep the conversation positive and productive.  Angry speech and personal attacks should find other outlets.  Thank you for understanding.  Now let’s get to work!!!